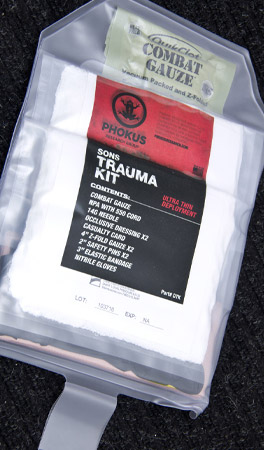 Phokus Research Group has been up to some crafty products for a while, one being their Sons Trauma Kit which offers an interesting alternative to traditional medical blow out kits. Rather than being a kit with a fancy pouch, the kit is shaped flat and slim sitting behind one's armor plate to make a great use of tactical space savings.

At the balance of perhaps not being the super fastest to deploy medical kit, The Sons Trauma kit can still be accessed in a quick manner, able be accessed by either hand, is almost unperceivable when worn, and saves space to allow more room on one's loadout for other important kit. This seems a fair balance as we still do need a medical kit for when lady luck skips out on day, however typically on duty folks are going to need to access other pouches a lot more often than medical IFAK pouches.

Although the Sons Trauma Kit can be placed into about any plate carrier, having one that has lower opening separate soft and hard armor external access should be a strong consideration. Usually the hard armor pocket has a pretty serious closure due to the intended carry weight while the soft armor pocket tends to have a lower key velcro closure. Due to this, one of the most preferred setups is to have the Sons kit in the soft armor pocket with the main pull tab sticking out through the opening allowing the easiest pull out access while being worn. An example of this would be seen on the First Spear AAC carrier, yet even on vests with separate soft armor pockets, having some other sort of retention is common. This can be seen easier on the Eclipse RBAV-AF which has the soft armor opening higher up rather than being at the bottom, which does make sense as the main purpose is to keep the soft armor in there even if the velcro seal gives out. For better or worse this causes enhanced retention on the Sons Trauma Kit, making it more difficult to extract one handed.

Like on any pouch, having 2 hands available makes things easier and faster to deploy the Sons Trauma Kit, but it being capable to be accessed by others, one's self, and with only one hand are all very important design features to be seen on any IFAK. Since the Sons sits under armor, which can be under even further heavy ammo and other gear, I found it a lot easier to release at least one side of the vest to provide more room and less tension to access. Although the pull tab is durable, if caught on something more durable, which pretty much describes any vest or carrier, the pull tab will break before the rest of the kit comes out. Thus focus should be on making a clean opening rather than muscling through a less desirable opening. Although deployment is still possible while sitting, it is easier while standing or laying down since easier to access the armor pockets.

When first installing a Sons Kit it is about as easy as accessing the armor, but it will change the vest sizing some so will require a little tweaking of the cummerbund / sides. Comfort wise I found the NPA the item of most depth so put that side facing the hard armor while the more flat bandage side facing my body. As recommended in the manual, one can get fancy and add adhesive velcro to their plates and carrier to keep the hard armor in place if using that compartment. Alternatively if going for a speedy extraction out of a separate pocket, using the velcro on the Sons kit and carrier can keep it suspended in preferred placement. The tear-open pull tab is reasonable with 2 hands, but if one desires an easier opening say for a one hand only situation, adding a tiny starter cut can go a long way to help ease while still keeping the kit sealed. Don't get carried away, I'm talking literally around a 2mm cut.

This is a pretty solid setup for stabilizing a gun shot wound and other wounds that are common with tactical dangers. Definitely noteworthy is there is no tourniquet so it appears on this loadout they assume the wearer will have one easily accessible elsewhere on their body. As another small detail the NPA comes wrapped in 550 cord, so you don't have to open any NPA packaging, but one will have to take the 550 cord off it before use.

For other interesting perks since the Sons Kit is placed behind armor this is about the safest possible location so although a rare possibility, one doesn't have to worry about their medical pouch getting shot or damaged. Additionally since mostly consisting of bandages the Kit can function as a pad not only for comfort, but for back-face deformation when the armor is shot. Made of machine sealed medical grade vinyl, the kit main packaging is very durable, waterproof, and designed to last at least 24-30 months.

On the flip side, since the Sons Trauma Kit is relatively a new concept and not visible externally, it is a piece of kit that should be standardized in small unit situations. As one might guess if you go rogue with a Sons Trauma kit while everyone else has an external medical pouch, when the time comes to use it the medic may not be able to find it and just think you are an asshat for not having an IFAK. This isn't necessarily an outright con, just a consideration that when rolling with the Sons Trauma Kit it makes more sense for the whole team to carry them so everyone knows about them and how to deploy.

The Flat SAPI plate shape of the Sons Trauma Kit also makes it handy for placing in backpacks so one can get creative with useful placement not just being limited to behind armor in vests. Phokus even offers several other variants, for example the Low-Viz version can fit in cargo pockets and various other similar locations while hence the name not looking like a bulky medical specific pouch.

So despite that there are a lot of quick and well thought out external medical pouches these days, if looking to save platform space or just keep a lower key appearance, the Sons Trauma Kit is certainly worth considering.

ShotShow 2014
Monday, 17 March 2014
The usual delay, but better late than never. Got the vids on up at:http://www.youtube.com/milspecmonkey/Our Buddy Don joined us again for the ride,... Read More...
SHOTSHOW 2009
Saturday, 14 February 2009
I was able to get the crew back together and make it to Shot all the way down in Orlando. People actually friggn' scheduled this time to we were some... Read More...

ITS Tactical ETA Trauma Kit Pouch Fatboy
Thursday, 29 May 2014
There are a lot of medical pouches out there these days so always good to see some unique designs like this one. ITS Tactical has been around as a... Read More...

Garrett Industries (designed by Tucker): Silent Thunder Pistol Holster
Sunday, 12 October 2008
<www.gimagclip.com> This isn't the most intuitive section placement, however I thought it was the best place until I make a holster section.... Read More...