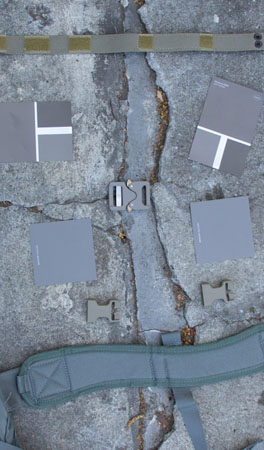 A problem I have come across lately is that we use warm greys in our patches and when doing this for custom work we sometimes get the not so happy inquiry on why the greys look brown. As it turns out, the go-to colors what most people think is grey actually doesn't match much in an urban environment. These civilian greys end up too blue or even if pure neutral, they don't have enough warmth to the color. Although concrete starts out some sort of grey, the outside is a dirty place and dirt tends to be brown.

This strings into my main point that it appears grey is the new black lately, but the easy colors in the supply chain like Wolf Grey were never meant to be a tactical color. Even when companies make their own urban ninja grey, I've found that there is little if any improvement to the color's urban blending effectiveness. Alas here I am to try and bring this issue to light with some real research on what could be a worthwhile tactical grey with the hope to make it a both popular and useful color. If everyone just makes their own variant of a medium or charcoal grey I feel it is a real missed opportunity.

So to get started I whipped out the ol' Pantone book, turns out despite all the crap I was getting for warm greys, they are still actually a little more cool than most my medium concrete tests. I looked around at some other nearby grey pages, but eventually found that color 7531 was matching things more often. When it came to cooler concrete colors, color 405 came in handy, which is actually a neutral grey. There can be quite the spread of urban color from light grey sidewalks, medium concrete, old asphalt, to even super black fresh asphalt so the goal is try and aim for the middle.

To expand my colors a bit and offer an easy way for others to get samples, I went on down to Home Depot to score some color cards. After more trial and error I was able to narrow things down to Fauna Brown 10YY 18/074 as seen on Glidden sample card WN26, this color happens to be very close to Elephant Grey as seen on recent Cobra Buckles. Additionally I found Mercer RL4126 from Ralph Lauren Paint cards at Home Depot to still be in the ballpark and to be more desaturated, thus looking closer to what people expect out of a grey. General observations from research so far in my area:

(For medium urban concrete)
Tan499 is apparently more kickass than I already thought, but for urban specific it is generally is too Tan
Foliage is generally too Green
Wolf Grey or similar is generally too Blue
Mercer and Fauna blend with old wood more than expected

After several days of experimenting so far I think Elephant Grey/Fauna is doing the best job of finding a middle point, blending the best when next to varied/unmatched urban colors. This said, a possible down side is Elephant Grey/Fauna is not vastly different from Tan499 and when people look at it, most don't think grey. So to balance that out Mercer I think is next in line on being the right tone and not as warm so more folks will still perceive it as a grey. Supply chain wise it is good to know Tan499 is in the ballpark when a backup color is needed for a material. There are finer aspects to consider as well such as perhaps keeping Mercer gear clean for cool grey zones and then get them naturally dirty for blending in. That idea on the other hand probably wouldn't fly as well for LEOs with the whole public perception thing, so perhaps better to aim for the right color on clean gear.

Anyway, don't take my word for it, check out this rowdy pile of documentation, starting with narrowed down color comparisons: (Important first pic so you know what is what)

Then the main pile; typically being an overhead shot, angled shot to show alternate reflection, and zoomed out shot to better show environment.  Done in varied light situations:

Hopefully folks find this interesting and or useful. Rather than trying to keep the idea my own big secret, the intent is to get many people on the same page to show both performance and demand for a good new urban grey. We can make use of this internet thing rather than the usual having some crazy pants person up top make an arbitrary decision (Looking at you guys who let ACU/UCP happen). I plan to keep looking into this project yet look forward to hear others' thoughts and seeing tests from other urban environments.

After some good feedback on this article I took the advice to try and investigate more concrete walls. As it turns out, most unpainted walls in my area are wicked bright, Pantone wise coming in around: 402 - 403, 7529 - 7530, WarmGrey 6 - WarmGrey 8, 7536 (on lighter end). I had my doubts hearing Crocodile (basically a desert tan) was being used in urban night ops, but after testing some lighter walls this made more sense. Based on this I got Wright Stone Tan 10YY 30/106 - card WN25 Glidden at Home Depot to add some lighter options to my testing. Instead of just small samples I also moved on to larger samples by painting cardboard chunks. For a more middle tone for my pile I also picked up Sparrow AF-720 by Benjamin Moore along with Brimfield RL4352 Ralph Lauren Paint, mostly as a light grey to mix with. By this time I dropped Mercer for looking too cool on most tests and in a bigger size the Fauna/Elephant had a little too much red, but was still good enough to keep around. Since Wright Stone Tan was going to be too rowdy on its own, I ended up with Mix4 for lighter end testing for a while. Despite enjoying sparrow for a light middle, it was showing just a little more green than wanted so after a couple more mixes I found Mix6 to be a nice result, being the middle of Elephant and Sparrow. I briefly tried Mocha, a color that looked good on the sample card, but with testing ended up pretty green.

After a lot of back and forth on mixing and documenting, I narrowed things down to Elephant/Fauna, Mix6, Sparrow, and Mix4. The differences were getting pretty darn subtle which perhaps is a sign of good progress. Elephant leans towards the darker side, and although a smidge too much red it still looks good in a lot of places. Mix6 seems like a solid middle ground so far on the concrete spectrum, yet is still brighter than most tac colors in use. Going a little more light, sparrow also is in the middle zone and the slight green usually does more good than bad. Then finally Mix4 leans on the lighter end as a good neutral color, which of course makes it more susceptible to contrasting on darker colors.

The color spread is pretty vast going from the darkest ground concrete to the lightest walls which makes this a tough choice on where to aim for on the spectrum. To try and put things more in context I started to take some misc city shots to see how they do on brick and storefronts to test how they blend on common highly mixed color environment situations. As expected about the only time I saw cool greys was when a building or object was painted grey, which wasn't very often. After this phase I'm starting to lean towards Mix6 as it has the middle ground concept, yet goes slightly towards dark which I think will match more with the varied colors of urban areas instead of thinking only about concrete. What say you guys?

MAXPEDITION Colossus Versipack and Manta Versipack Dual Review:
Friday, 06 July 2007
Due to the similar core platforms of these two versipacks, I have chosen to display both reviews in one post. Forgive me if this causes the flow to... Read More...

Strikemark SM-1
Thursday, 12 January 2012
I had a chance to beat up on the Strikemark SM-1 not long and wanted to spread the good word. There are plenty of hard steel targets out on the... Read More...

SKD-TAC PIG Hydration Carrier
Friday, 16 September 2011
SKD TAC continues to bang out goodies on their PIG line with one of their latest being an assault sized hydration pouch. The approach is very... Read More...

More Sparrows Lock Tools - Sentry - Ultra Decoder - Snap Gun
Sunday, 09 December 2012
For any MIL / LE folks that had their eyes on the Sparrows Tuxedo Set, this new Sentry set is certainly worth looking into. The main upgrade is... Read More...