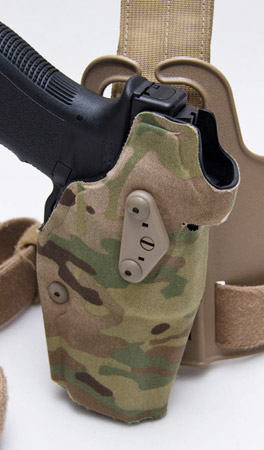 This is a review I should have done a while ago as I've been using ALS (Automatic Locking System) holsters for a while now. Safariland didn't actually send me anything so I didn't have the usual feeling of obligation to get something up in a timely manner, however I tend to always think better late than never. In summary when it comes to a full on combat / duty style holster, I think the ALS series is the best thing out there.

Now what I expect out of a combat holster is: durability, some form of retention, and an easy release method (yes jokers, we'll assume "safe" is a standard requirement as well). Durability means it can survive combat abuse of being banged up all day and preventing an enemy tearing the weapon off, retention beyond just friction so you don't ever have to worry about your weapon falling out, and an easy and reliable way to release the retention so it does not take too many steps or leave one's hand in a non usable grip, the ALS series fits these key points quite well.

Not that long ago, the ol' Safariland 6004 was one of the go to duty holsters making a great balance of tactical expectations at the time, but it did leave room for improvement. It was a hassle to always have to flip the hood back in place to fully secure a pistol after re-holstering and the thumb movement required to release the hood felt like a 2 part process to do consistently. The ALS system smashed these issues where now the retention is spring loaded grabbing onto the the ejection port rather than the back of the gun so the weapon is automatically locked just by placing it into the holster. The placement and rotation of the release lever is also genius where it is naturally activated when going for a strong combat grip. One doesn't have to push some random thingy in some other direction, the thumb just swipes it naturally.

While the ALS design had been out a while, cool guys started to put optics on their pistols and Safariland followed up making the secret squirrel Model 6354DO ALS Optic Tactical Holster. This thing wasn't even on their website for quite a bit of time and had to be special ordered by those in the know. Originally intended for Glocks with a Docter Optic, as the name implies, the ALS mechanism had to be reworked since where it originally mounts in the upper center, is space where the optic needs to be. As a result on the DO variant the ALS system connects at the sides with a separate spring for retention rather than straight material tension as seen on the original. Apparently the pistols that the 6354DO model was made for either had rear iron sights in front of the optic or none at all as I've had to make some mods to make my G17 with RMR and suppressor sights fit. I've got mine with co-witnessed suppressor height iron sights, the rear being behind the optic to not lose sight radius, the way Jesus would want it. So anyway, I had to shave the optic hood zone and the internal security piece down a bit (shown in the pics) with a Dremel to get the extra space I needed. Fortunately it wasn't anything too dramatic and the internal area I shaved down is no where near the important ejection port locking zone.

The Models I show claim to be made mostly of SafariLaminate, which seems to be a fancy way of saying Kydex and have suede lining to play nice with the weapons finish. The usual solid colors are offered, with a Multicam Cordura wrap being a slightly more new option for those who really need to blend in with their surroundings. I haven't been in extreme temperatures, but they have held up to all the punishment I've given them in various classes. For smaller details there is a little bit of play as in how the pistol sits in the holster, fortunately overall minimal on noise causing potential while running. I believe the play is a result of giving some error tolerance to make sure the weapon is secured by mere gravity when placed in the holster rather than having to force it down running a higher risk of not getting a positive lock. Trying to tighten the screw near the trigger guard did not seem to adjust this play issue for me. As one might expect the tac-light capable version of the holster has little more play mostly due to not having the lower ramp seen in the other versions. Even so, you can still secure a G19 in there with no light on and it will lock in despite being a bit wobbly. Although most ALS designs sport an open bottom design for letting debris pass on through, the 6354DO tac-light variant has a closed bottom most likely to minimize any accidental light discharges.

So far the ALS series has also been working great with the smaller pistol details as well, such as not getting in the way of extended mag or slide releases. The tac-light variant even has room for the DG pressure switch when using with a x300 type light, which I've found out can actually be a fairly rare holster accommodation. Safariland offers a great assortment of platforms and modular accessories such as their QLS Forks and Plates. Since I personally don't have other places I need the holster to be I just directly mount to my platform so save on the little bit of body extension. I always recommend a high ride when possible (below armor, but above hands extended down at sides) so I roll with the lessor known Model 6004-10 Tactical Leg Shroud. The main difference is it is sized to only have 1 leg strap as opposed to 2 seen on the original shroud platform. Although I could have made do with the supplied heavy webbing I also made my own belt connection strap that is a bit more flexible to not get in the way of leg movement as much.

Apparently always in pursuit of improvement, the 7TS ALS series is available these days (I know, actually been around for a while now) where the core material used is an injection molded proprietary nylon blend to offer improved durability, temperature resistance, and even weight savings. When it comes to optics there is also the ALS P-2 holster which is still the old material, but adds a spring loaded cover for those who were worried about getting crap all up in their optic while rolling in the mud. I look forward to seeing a new polymer variant with light capability from Safariland; this would also be a good opportunity to fix the optic spacing so one doesn't need to modify the holster if rolling with the more common RMR with rear sight behind setup. One realization that I've embarrassingly only recently come to is that your combat pistol should have a combat light on it, don't dick around with it as a maybe later idea, just do it right from the start.

My buddies at OP Tactical should be able to help you get a hold of one of these:
http://www.optactical.com/sa63.html

SUREFIRE E1B Backup and G2L with alluminum Bezel
Sunday, 15 June 2008
I first saw this lil' guy at Shotshow 2008 and ever since I've been wanting one. The original intent was for everyday carry for undercover police... Read More...

COUNTY COMM SERE Wrist Compass
Saturday, 30 August 2008
Quick feature and spec list: Luminous dial and sight line (painted with MARAGLO) Induction–damped 10 degree graduations Water resistant to 3 atm.... Read More...
Tactical Response - THE FIGHT - Force on Force Scenarios
Sunday, 09 August 2009
Back in February the Tactical Response wagon came nearby my neck of the woods and with a little help from Original Special Operations Equipment owner... Read More...
Corps Strength - Book Review
Friday, 30 July 2010
Clearly I don't read as much as I should hence there not being a perfect category on my site for this review; none the less I wanted to share one of... Read More...