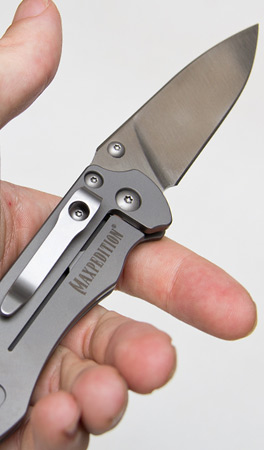 Maxpedition has been going for more of a classy look meets hard user design lately and the Excelsa knives are a good example of that. Made of great materials and quality the function is there, but a good amount of attention has been put into the aesthetics as well to give what I would call a modern gentleman's knife look.

Offered in sizes of small and large, they are fairly appropriately named. The small being approx 3.9" folded with 2.9" blade is a good pocket size easy to stow while the large is approx 4.7" folded with a 3.6" blade making it actually a good medium size when it comes to tactical folding knives. I'm guessing with no other size offered it was just easier to call them small and large when referring specifically to the Excelsa line.

The construction is pretty fancy with 6Al4V Titanium alloy handles and D2 tool steel with cryo heat treatment for the blades and in general great attention to detail. Even the screws used match the look with all parts fitting well, resulting in no wobble on the deployed blade or anywhere else. The box the knives comes in are pretty nice with specific foam padding and include a 2 sided torx wrench so maintenance can be performed without having to buy anything extra. This includes being able to change the placement of the pocket clip to be up or down position. I dig the clip design as it has a good default grip without being overkill and the knife itself is slick so won't harm your clothing. As a sign of good design, a hole is integrated into the clip so accessing the mount screw is easy.

Back to core functionality the blades are done in a classic drop point style using a frame lock system. Drop points perform well for all kinds of cutting tasks while being easier to sharpen and in this case match the knife look too. I am generally a fan of frame locks since by design they are safer when doing heavy twisting due to one's natural grip keeping the lock in place. The frame lock bar only locks into the pivot about half way so that could be a little bit better, however it has been sufficient and I have not come close to having any accidental unlocks.

Keeping up with the smooth and clean looks, the spine of the blade is rounded which can make detail work that extra bit more comfortable. There is also texturing on the spine, however I found it too rounded and minimal to be effective when using it for thumb placement. It doesn't hurt anything, just doesn't help much either.

Onto the subject of the thumb stud comes what I feel is the only big con to the design. The thumb stud itself I like with an aggressive stair step design, however it is only on one side so left hand users are hosed or are going to need to do a less than preferred method of release like rotating the stud on one's belt. I may be a right handed guy, but being able to use with my other hand is important to tactical folks and hell, it isn't crazy pants to end up in a situation needing to use a knife with my left hand when doing simple tasks. It appears the thub stud side is switchable since screwed in, but I had no luck trying to actually make it happen. The screw was over-tightened on my small one and even when I got the screw off my large Excelsa I couldn't get the stud to come out. I'm sure it is possible with the help of some work bench action; I just didn't want it bad enough at that point. Even with a successful thumb side side swap, it is going to be harder to operate since the frame lock is on the other side in contrast to the nice ramped handle on the right side. In summary this is a right hand carry specific knife.

As for other usability notes I run into the usual small person problems that most other's won't. The amount of force needed to fold the blade out is reasonable, but ironically on the small size in particular my hand likes to naturally grip the knife in a way that puts pressure on the frame lock that makes just opening difficult. With practice this is certainly a fixable usability issue so is more of a first usage note. On the larger size my fingers end up in different places in relation to the frame lock so I don't run into the issue near as much. No matter the user however, the thumb stud seems to work best with a full side directional force or at least a diagonal side / upper as opposed to some other designs that prefer more of a push up release. For another tactical note the handle is quite smooth so will be a bit slick when wet, this is clearly just a design decision based on the look and clothing friendly properties Maxpedition wanted.

The Exelsa has great attention to detail to meet a blend of looks vs functionality, just hopefully the thumb stud gets a second look in some later designs. In the end the Exelsa series may not be tactical specific, but are high quality knives at a reasonable price. They will likely do more impressing than scaring off when whipped out and that design feature does have times and places where that can be handy. For the money my preference is certainly for the larger size, however for those who rock some tight pants or have blade length limitations it is nice they offer a smaller pocket size.

Surefire EB1 Backup with Thyrm Switchback
Saturday, 16 August 2014
I've been rocking my old SureFire E1B backup light as a part of my EDC (every day carry) loadout for quite some time, but while wanting to try out... Read More...

Graham Combat Training
Saturday, 17 October 2009
One of my tactical buddies had some training lined up with Matt Graham and offered me to come join in the fun. Luckily the warehouse was semi in... Read More...
THOR GLOBAL DEFENSE
Friday, 04 September 2009
NON Review newsflash: THOR GLOBAL DEFENSE GROUP TEAMS UP WITH EDM ARMS Looking to the Future for Extreme Long Range Shooting Systems In today’s... Read More...