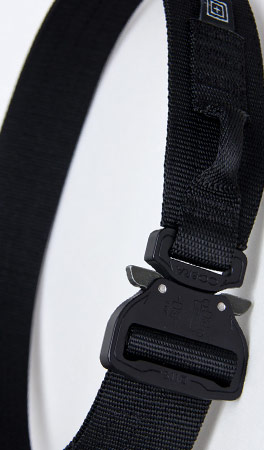 Originally shown back at shotshow 2013 earlier this year, I finally got a hold of one of these 5.11 Maverick Assaulter's Belts and it is everything I hoped it would be. There are a lot of good Cobra based belts out there, but the attention to the small design details really makes the Maverick shine.

For starters the big show is definitely the Cobra buckle, which is a bad ass buckle; looks slick, quick/easy to use, and climbing rated. One down side however is most folks want about 1.75" of width for a rigger / gun belt and the corresponding 1.75" Cobra buckle typically doesn't go through pant loops so great. As a result one has to break down the belt each time they want to take the belt off a pair of pants (Hey we all gotta wash our pants eventually). It isn't the end of the world, but a hassle compared to say traditional belts. To fix this problem the Maverick has the main webbing still be 1.75" wide with a female adjuster Cobra side, while on the other side the belt tapers at the very end to a 1" male making great use of the Cobra interchangeable parts. This 1" male is much more manageable to push through belt loops while still having the heavy duty durability.

Another pant loop conflict seen on rigger's belts is usually they sport a big ass metal v-ring. Wanting to keep the backup carabiner clip-in capability the Maverick has a webbing loop that keeps the functionality while also dropping a lot of weight. One still needs to press down a bit on the clip-in loop to make it easier to pass through pant loops, but it is a hell of a lot easier than dealing with big metal hardware. Once in place the loop is pretty nice as it stays rigid enough to not collapse while being generally low profile.

I'm not sure how they do it, but a big plus is the shape of the webbing that makes up the belt is ergonomically curved so it contours to one's body properly. This not only looks better when bending over or sitting, but more importantly is comfortable for long term wear as well. The end result of the Maverick 2 ply webbing foundation is a good rigidity for general tactical use. It is plenty rigid enough to mount a pistol rig to while offering enough flexible give to keep the ergo comfort factor going. Topping off the attention to detail, the Velcro used to secure the adjustment slack is a more quiet version that still keeps a solid grip. Sure, most people aren't going to be adjusting their pants mid stealth OP, however such plus features are still appreciated.

As one might have guessed the Maverick Assaulter's Belt doesn't come cheap, but you certainly get what you pay for as it includes about every worthwhile feature currently applied to modern Cobra belt designs. The design really stands out by hitting all the big key points of ease of use, comfort, and durability. They even come with a hanger that interfaces with the Cobra buckle to add to the cool small details pile. Currently available in Black and Sandstone in sizes S all the way up to 4XL.

Toy Soldier Workshop -"Hi-Speeder" Camera Strap
Monday, 15 February 2010
So have another item from the Toy Solider Workshop photo series for you guys. This camera strap is overall pretty beefy and made from good materials... Read More...

JONES TACTICAL - Cobra Shooters Belt (CSB-01)
Saturday, 25 July 2009
You may have not of heard of him, but Jones Tactical is hitting the scene offering some no messing around heavy duty custom gear. For this particular... Read More...

Jax Pax Packs: Bug Out Belt
Sunday, 26 April 2009
You probably haven't heard of Jax Pax, but I do enjoy showing off quality gear from lessor known folks. This setup here is pretty unique in which... Read More...

ShotShow 2011
Friday, 04 February 2011
Ahh, slow as usual, but we always come though. It was a nice change to not be rained on the whole time (in the friggn desert no less). For a new... Read More...
SHOTSHOW 2008
Saturday, 23 February 2008
I brought more Army Game buddies with me this year to try and step it up a notch. I didn't do as many photos, but made a mean batch of product video... Read More...

SUREFIRE E1B Backup and G2L with alluminum Bezel
Sunday, 15 June 2008
I first saw this lil' guy at Shotshow 2008 and ever since I've been wanting one. The original intent was for everyday carry for undercover police... Read More...