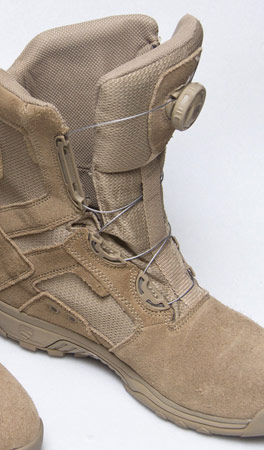 Footwear typically doesn't change too much these days so it was a treat to checkout something truly different with the Blauer Clash series. The main stand out is certainly the BOA lacing system used which uses a steel cable and rotating cinch concept instead of laces you tie. Originally the BOA system was for snowboard boots and has since been applied to all kinds of boots and other footwear.

The BOA functionality is pretty simple and intuitive where one just turns the main knob clockwise to tighten when in the locked position and then can pull the knob outwards to release. Since there is overall low friction between the cable and routing hardware the end result gives a very even laced fit. A huge plus to this system is that there are never any laces dangling down waiting to trip you or generally requiring management. Typically it takes me at least 6 good sized knob turns to go from putting the boots on and tightening which is still plenty faster than tying and tucking laces. If going on a longer adventure I usually end up tightening them a little later as the cables auto even out. I'm not sure how I feel about that aspect yet as I don't have to do that with my laced boots, however I think how easy they are to tighten and loosen on the fly to really dial in the fit is a plus.

Overall the BOA system is durable where you will have to be doing something pretty wild to break the steel cable, but the plastic based knob is somewhat of a weak point. Doing my usual no messing around testing I tried purposefully snagging the knob while climbing a fence and it didn't break off, however it did make it non functional, no longer being able to press down all the way to lock. Fortunately I let Blauer know and they got a repair kit my way. Using BOA's custom tool it was no big deal to unscrew the busted knob off and replace with a new one rather than having to get a whole new pair of boots.

Not to be forgotten, the boot itself is a nice ride, comfy right out of the box; I didn't have to break these things in at all! Hence the LT, it is an overall lightweight design with a pair coming in at around 18oz. The foundation is a mix of suede and mesh with a good dose of perforated foam for padding comfort. The back has a generous sized rubber patch for heel protection and additional ankle stability along with a notches upper back for calf comfort. To help with both ventilation and drainage there are weep holes in the medial arch, Jungle Boot style. There is no pull strap on the back since with the BOA system it is never a struggle to put these boots on. The interior in general has antibacterial and moisture wicking properties as expected from a modern boot.

I found the outsole to my liking as well, sporting a pretty unique tread pattern. They went somewhat a half and half approach where some areas are good for urban and some are good for terrain to balance things out. Apparently the intent of the toe grooves and hex notches is to also help with climbing fences which can be pretty handy. I luck out where my little monkey feet usually go into chain link enough to get a good purchase, but bonus grab is even better. For those getting into high adventure there are even some groves and an integrated ESS shank for fast roping. The clash boots feature a radiused heel where their intent was for long term driving comfort; I dig this style for general heel pivoting as well.

Blauer was kind enough to even get some of their B.COOL 9" Performance socks my way too for the full Blauer experience. They were a great match for the desert (warm weather) style Clash LT boots offering a nice tight fit and overall thinner material profile. At a size 7 foot I'm on the lower end of their standard 7-10 sock size, yet still got a nice snug fit. The zone layout is a good balance offering some cushioning where you need it and staying low profile elsewhere. Made up of 75% COOLMAX®, 15% Spandex, 5% Nylon, 5% Elastic Blend these socks offer great moisture wicking, compression, and even anti-microbial functionality to tone down the stink.

As mentioned earlier, the knob of the BOA system is the main thing that complicates tactical use. They will stay out of the way the vast majority of the time, but do have the possibility to complicate rope climbing or generally snag with possibility to release while doing obstacle course level leg work. For a possible balance, adding some sort of ramp under the knob would like minimize these issues. I'd say add a ramp to the top of knob as well, but then it would be a hassle to turn to tighten. Making the knob more dome shaped (less flat area on the sides) perhaps could be another way to lower snagging potential.

The pros definitely outweigh the cons on these boots especially if you don't plan on doing much climbing work. That said, those who really like to divide up their tension zones on boots should probably pass as the BOA system aims for an overall even tightness by design. As a whole I'm digging the feel and functionality of the Blauer Clash LT boots and look forward to pounding on them further to test more real world and long term use. They really stand out as something different rather than being limited to the usual small checklist of possible feature choices on a boot. I really like how I can slip them on loose to air out and generally be comfortable without worrying about laces flailing everywhere, then can quickly get ready to get down to business with some knob twists.

SHOTSHOW 2013
Saturday, 15 December 2012
It always seems harder to catch up after shotshow each year, but we have a good pile of videos as usual:http://www.youtube.com/milspecmonkey/Our... Read More...

511 / Blade-tech:Training Pistol Barrel - Sig 226
Sunday, 11 May 2008
This is a straight forward item that assists in training safety and identification. To install ones just breaks their gun down and replaces their... Read More...