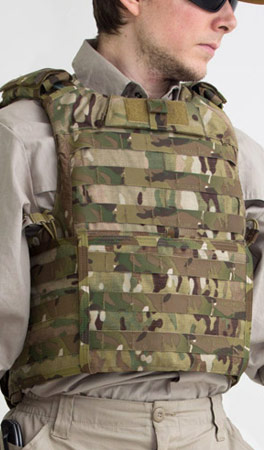 Amongst all the ultra-light carriers these days, there still is a need for full armor carriers and the BAE Eclipse RBAV-AF is one of the best current specimens. Many modern plate carriers offer a soft armor slot, however these are sized similar to the hard armor leaving the sides unarmored. The RBAV-AF accepts SPEAR/BALCS soft armor to offer more complete wrap around soft armor side coverage. Highly based on the RBAV-SF, the AF version has many small improvements and rather than going into super detail let's just say the vast majority of users will prefer the new AF version.

For those familiar with the older and popular CIRAS armor, the RBAV series was made by the same folks with the intent to streamline the overall carrier design without losing functionality. On that subject, the RBAV keeps the integrated quick release system, another large design feature setting itself apart from other carriers. For those not in the know, a quick release is not for lazy folks at the end of the day, but for escaping life threatening situations such as accidents in water or quick medical access capability.

The release pull loop hangs out on the upper front making it overall ambidextrous and as a bonus ends up a little like a chin pad. To add slightly more ease I recommend the cord is routed on the shoulder opposite of the arm one intends to pull with. Either hand pull will do just fine; the extra distance setup allows the motion to be that dash bit easier. Overall the release system is based on slick coated wire going through Dacron loops threaded through grommets; the key connection points being at the shoulders and then 3 points in the back to hold the outer and inner cummerbunds. Multiple grommets are at the shoulder zones to allow shoulder strap length adjustment. This setup obviously is near impossible to adjust while wearing, but I can see where adding that feature would have created more bulk. When seen in pictures or videos the quick release system appears pretty crazy and complicated at first, fortunately once in hand and you set it up a could times, it is easy to reassemble a released vest in about 2 minutes. Most importantly this release system works when in full load out weight, as opposed to some other systems where the weight causes great friction making the release very difficult. Once the release system cord is pulled out, this frees both shoulders and both cummerbunds. Since the main load bearing is thankfully not on the release system, a little truffle shuffle may be required to get the vest to drop free, but an easy and quick step none the less.

Overall I was able to make the RBAV-AF ride high on my chest how I like it to not only cover vitals, but make room for a battle belt on my hips. The PALS webbing channels are laid out well offering a lot of pouch mounting real estate. I have size small which messes with this comment some, however the more common large size offers 7 channels x 6 rows of PALS on the front and 8 channels x 3 rows on the back tapering into 10 channels x 6 rows on the back. This offers a lot of mount room flexibility especially in the front lower zone which can cause serious mounting problems when too small. Very specific to the small version, they jipped the side channels so I only really have 5 true channels and 2 runty small channels I can barely run Malice clips through. It would be more complicated manufacture wise, but offsetting placement to have 6 true channels would be much better in my book. The cummerbunds have the standard 3 row PALS and length/channels will depend on size, generally being plenty. For closure a velcro wrap method is used to attach the outer cummerbund to the vest then secured with the lower flap. I like how the lower part then tucks in securing this flap even during heavy movement. There is a metal snap in this tuck in process to offer extra security which can be difficult to align, however I find just the velcro tuck sufficient. Not to be forgotten is the inner cummerbund which is simple wide elastic with velcro closure. Having the external cummerbund not have any elastic is a bit of a downer as it can always be tricky to find the balance of snug fit for mobility while being loose enough to breathe easy. Despite this issue the system gives an overall comfortable fit. If I decide I want it bad enough, I'll incorporate some shock cord into the back / side PALS connections to create elastic tension. Main adjustment of both cummerbunds is done adjusting webbing lengths accessed in the lower back panel. Access is overall easy as the panel uses a velcro and snap closure for the flap. Once setup to the general desired size, fine adjustment is achieved by how tight the closure is sealed up front when putting the carrier on normally.

To add more carry options there is a kangaroo style pocket built into the lower front with a slim velcro closure. One can keep this slim for admin items or push the capacity to hold a pistol or rifle magazines. It isn't a big deal, but the pull tab meant to assist with pocket opening is just small enough to taunt the user that it should be longer. The carrier sides also have some extras offering shock cord tab retention of 2 rifle NATO rifle magazines on each side. Alternatively these pockets can be used to hold side plate armor or other gear holding such as radios. For another size small quirk, I could not fit 2 rifle magazines in these side pockets without undoing the velcro middle divider meant to give a snug fit so the magazines don't bang together. It can sort-of be done, but with movement or putting magazines in / out will cause the seal to come loose. Again this appears to be a small size only issue. Generally I leave my sides low key, however when adding weight to the sides with heavy or bulky gear, sagging of the external cummerbund can be an issue. On the upper back area there is another velcro flap that helps give access when installing the release cord and as a nice bonus is setup to accept a hydration bladder with even a hang loop and interior sleeve pocket. While there I'll note the pull handle is fairly minimal. It certainly stays flat and out of the way, however this may be harder to access when frantically trying to grab on a downed comrade. For an easier grab a simple fix is to wrap the middle part of the handle in some sort of cord or material wrap to bulk it up a little. Nice shoulder pads are included which mount by velcro wrap with the intent to also offer cord management. D-ring flaps are integrated into the main shoulder straps to offer some flexible attachment points whether it be as a sling or hardware holder. For even more cord management, sneaky button type holes are on the upper front of the carrier. For advanced users, be advised getting creative with a lot of wire routing can effect the quick release system.

Moving to the interior sides, mesh is used to help with weight reduction and air flow. A simple velcro closure opening is located near the bottom to allow interior access to the armor pockets. Inside are sleeve pockets for hard armor and a nice big velcro strap to adjust plate ride height. The setup almost looks too simple, but works great keeping itself nice and sealed utilizing the default pressure of wearing the carrier. There isn't a special extra soft armor sleeve zone, it is just placed in there on top of the hard armor (towards user). The instruction manual makes it sound confusing too, but the only placement option soon becomes apparent once one tries. As a plus I was able to fit a non BALC cut soft armor into these armor pockets so there is some flexibility room. Since everything else is designed so well I'm surprised to see the groin pad connection be these big ass SRB buckles. Also surprisingly I don't feel them too much while worn, but they can certainly be felt when in the prone position. Now that I have documented how they come, I plan to cut the hardware out and leave the loops if I even need a nut pad later. I'll guess these buckles were some sort of forced legacy connection method, but the end result is ridiculous comfort wise.

Although more common recently, having the carrier using camo matched webbing is a great touch to allow solid camo matching no matter how few pouches are mounted. With my main complaints being small size specific or low effort fixable, I highly recommend the RBAV-AF as a full featured armor carrier. With sizing comes quirks, yet more importantly offering a good fit to the user. It isn't the lightest or cheapest, but the RBAV-AF still balances out all design aspects quite well for what all it offers.

Recommended place of purchase and for bonus intel / video:
http://www.skdtac.com/BAE-RBAV-AF-p/bae.510.htm

CAMELBAK Better Bottle
Saturday, 05 April 2008
My crew and I happily picked up some of these at shotshow 2008. The concept appears to be a clear response to Nalgene's monopoly on the durable /... Read More...

Strikemark SM-1
Thursday, 12 January 2012
I had a chance to beat up on the Strikemark SM-1 not long and wanted to spread the good word. There are plenty of hard steel targets out on the... Read More...

Blue Force Gear: Trauma Kit Now with Tourniquet Now Strap
Sunday, 17 May 2009
<www.blueforcegear.com> DIMS: Approx 5.5"W x 7"H x 3"D Most are figuring out that a tear away design is the way to go for a personal medical... Read More...