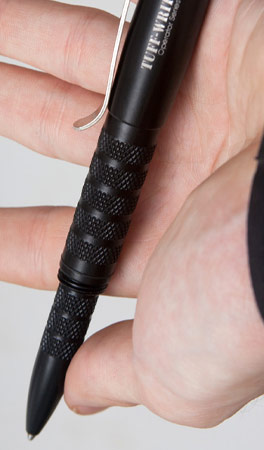 Tuff Writer has been keeping busy and offers yet another variant of their tactical pen design. It looks pretty similar at first, but I think they did some really great changes on this operator series to make it shine. It is closer to the EDC size, only being slightly longer and has a point more like the original Frontline series which is less sharp than the EDC variant. I dig the size as it short enough to allow for easier holding options whether it be a pocket or notebook while still being long enough to be a plausible self defense tool.

You may have noticed how the end tapers down which brings up one of my favorite changes; the cap can now be placed on the end while using using it in pen mode. They somehow snuck in an o-ring into the cap so it clicks onto the end snugly. I expected it to be scrapy metal on metal, yet it is actually nice and smooth. The taper of the end also integrates into gripping options well feeling natural. I actually wish the pen writing side had the taper as well, but maybe I'm just a weirdo how I grip a pen to write with.

Another great change is the threading has been shortened so the amount of twisting to take the cap off is much less. An o-ring is integrated nearby these threads which keeps the cap from slowly unscrewing while stowed and creates a snug feel. The amount of threading still feels just as solid as the older editions that had more. It wasn't a big problem for me before, but the pen end of the body now supports inner reverse threading to prevent it from coming loose while unscrewing the cap. As a quirk however, since the cap goes over the body rather than into it, the cap can be overtightened which then starts to unscrew the inner body. I consider it a mere small drawback as it feels obvious where you should stop trying to screw the cap, requiring one to go all hulkster on it to overtighten. For less noticeable improvements, the powder coated clip has bonus corrosion and scratch resistance along with pre-anodize metal finishing allows for a more even anodize adhesion. Although it is supposed to be more durable, I wish the clip was black. There is also a grey version of the Operator pen that sports a black clip so it appears the color selection is just a design appearance choice.

The core features stayed the same so I'm gonna copy a paste a bit: The clip is still made of heavy duty spring steel with rowdy chemically welded bolts. In summary I won't be worried about that breaking off anytime soon if ever. Functionality wise it has good tension and the raised end lip makes it easy to mount. The cartridge is the same ones used in those cool guy space pens so they are pressurized allowing the user to write upside down and in extreme temperatures. They are affordably replaceable whenever you do run out of ink. The exterior finish is pretty snazzy and so far has been very scratch resistant. Although the finish isn't super flat matte, it is non-reflective and won't take on fingerprints. A lanyard hole is in the cap to allow your favorite cord to be added if a connection point is desired. As with all the Tuff-Writer pens so far, the kind of user they attract are those who like things super simple and heavy duty. As a self defense tool it may not be a knife, but a poke anywhere with this thing will get a bad guy's attention. For those trained for it, the Operator pen is long enough for hand and arm trapping techniques. The tip isn't made to be a specialty glass breaking device, yet it will get the job done all the same when it comes to busting windows.

All changes made are very positive in my opinion. If I were to try and push things further I think the cap itself could use some knurling treatment or some form of grip enhancement. The middle of the pen has nice knurling, yet while holding, usually only two fingers of one's hand will touch knurling while the rest of the hand is touching the rather slick cap. Consideration would need to be made with placement so any grip enhancements don't tear up pockets with abrasion, but I think it is certainly possible. All in all, not having to twist as much to get the cap off and being able to store the cap on the end fixed my major gripes thus the Operator is my fave Tuff Writer pen so far. Tuff Writer is clearly listening to users to make their already solid products even better.
www.tuffwriter.com

VTAC:Light Mount Gen 2 Prototype
Sunday, 31 August 2008
My buddy Kyle Lamb passed on one of his latest products my way to get a sneak peek. You might be familiar with VTAC's current light mount which is a... Read More...

Griffon Industries Kydex Holsters and Carriers
Tuesday, 27 May 2014
Back in the day I first learned of Griffon Industries for their photo and calendar projects, turns out they are like me and dabble in making gear as... Read More...

COUNTY COMM 10X21 SPY MONOCULAR
Saturday, 11 August 2007
6.5 degree field of view, made by NcSTAR Picked this lil guy up for viewing targets on the range and to generally see things further away on... Read More...

Fenix - Flashlight Grab Bag: PD20, PD30, TK12
Saturday, 12 December 2009
Maxpedition offered this set for me to check out and although a little skeptical at first, I thought I'd give them a try to see what else... Read More...
UCP SUCKS (Universal Camo Pattern) RANT
Sunday, 25 February 2007
UCP SUCKS (Universal Camo Pattern) RANT: - For starters I have to breakdown all the acronyms just to make sure you know what the hell I'm talking... Read More...
Viking Tactics Pistol 1.5 Class
Tuesday, 30 September 2008
Viking Tactics Pistol 1.5 Class Back at shotshow 2008 I was fortunate enough to meet up with Kyle Lamb and was quickly able to determine he was a... Read More...

MAXPEDITION - Padded Pouches - 4.5" x 6" and 6" x 6"
Sunday, 09 August 2009
These GP style pouches offer a solid padded option for those who need to carry more delicate objects such as electronics. With both sizes having... Read More...

5.11-TACTICAL Tactical Vest
Sunday, 15 April 2007
Sorry I know the placement is confusing, but despite the name, most of my visitors do not think of this item when they hear tactical vest. In the... Read More...