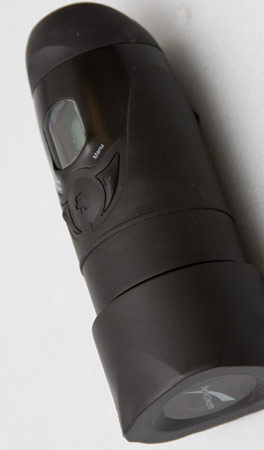 SPEC Party:
Waterproof up to 3 meters and shock resistant for extreme conditions.
Mount included for RIS/RAS interface system or weaver style mount.
640X480 VGA resolution at 30 frames per second.
Both USB and RCA cables are included for easy playback on a PC or TV (NTSC).
Onboard memory is 32mb (good for about 5 minutes).

SD card expansion works with up to a 2 gig card (approximately 1 hour of audio and video at best quality) SD card is not included.
Operates on two AA batteries, approximately 2 hours of use on a set of batteries (not included).
Dimensions 4.25L x 1.75D x 2.25H (inches).
Weight is 7 oz total for camera with mount, batteries and SD card installed
Camera weight is 3.2oz, with two AA batteries and card installed 5.5oz.
Ring Mounts weight is 1.7oz
I've had this unit for a bit and still continuing to pound on it, but wanted to make sure and tell my experiences so far. Most of the tactical camera rigs I have are pretty fancy, but the recorders are separate from the cameras, causing a lot of wire tango to deal with. The ATC took a different approach and put everything together into one fairly small package resulting in no wires when recording. The only main feature missing is a display to instantly review footage or test your setup.

Some folks may have noticed the ATC looks a crapload like the Oregon Scientific ATC2K. The story behind this is that the ATC is actually a hardened variant made with similar tech specs, but can withstand much more shock such as recoil when mounted to weapons. The ATC comes with most things you will need to operate, but you will need to buy your own SD card and 2 AA batteries. In the package comes the Main camera, Picatinny rail mount, Hex tool for mount adjustment, Greese for improved waterproofing, USB cable to move files onto your PC, A/V cable to playback direct to a TV, and a Fold up paper manual. The SD card compatibility can be a little picky in which my freebie 2gig SD card that came with the VIO POV.1 didn't work and a Sandisk Extreme 4gig card did not work. I ended up buying a no thrills el cheapo 2 gig Sandisk that works well. www.newegg.com and www.amazon.com are good places to score some cheap memory cards. In the event that you are having a bad day and forget your SD card, it is nice to know there are 32 Megs of onboard memory which can give you about 5min of emergency footage. Luckily since the batteries are AA, they are quite easy to manage.

Due to only having 3 buttons, the user interface is a bit like a cheap alarm clock. Changing settings and reading the little icons of what mode you are in isn't a blast, but it can be done. I just leave mine in high resolution and 30 fps so I don't mess with it much at all. Pressing the buttons requires a good amount of pressure. Sometimes I get a bit frustrated with them, but I understand the buttons can't be too easy or else every contact bump is going to mess with the camera. With this situation I just push as hard as I can and listen for the confirmation beep. If you can't hear anything, the LED display is another option which will show the camera status. Although I just complained about only 3 buttons earlier, this helps keep things simple when actually deploying the ATC. Even with big hands and / or gloves, the buttons are spaced far enough for users to toggle them without looking. That said, it would still be nice if the buttons clicked or had some sort of tacticle activation confirmation.

The end result video is stored as simple AVI files on the SD card. The quality won't win any awards due to being typically over contrasted and grainy, but one must consider the price of the unit. Overall it is good enough to see what is going on and that is the main concern for most people. The sound however, I'll go ahead and say sucks. From what I can tell this is due to the waterproofing. As a mod, Military Moron was able to take off the bottom panel to gain access to the microphone area. The screws to this area are pretty wacky, but word on the street is an allen wrench can make do. Once open, a rubber cover can be removed to improve the sound, but waterproofing will be lost. There will also be an increased risk for mic blowout when attached to weapons, however I have not heard of any confirmed blowouts yet. Apparently there is a surprising demand for those who don't want sound in the first place, so the ATC can be toggled to not record sound at all.

When mounted to a weapon the ATC holds up pretty well. On 5.56 semi-auto weapon testing there seems to be a slight jolt to the video on each shot. This is overall a low key issue and sometimes it is hard to tell what is smoke, flash, or video jolt. Be sure and check out the video samples to see what I mean by jolt. For helmet mounting I was fortunate enough to have the OPS Core helmet rails so that was fairly easy. That noted, it would be nice to be able to rotate the camera easier within it's mount. If I want to switch between gun mounted and helmet mounted, when not the same orientation this requires me to have to bust out the hex tool and fully take the mount off. Since it uses 4 screws, this can take a bit. At the ATC's defense I will say despite being slow, it is very secure and will be preferred by those who don't change the camera position much. If I am concerned about making sure what the ATC has in frame while mounted, I will do a quick recording and hook it up to my small Sony Handycam to review the footage. This isn't a nice as realtime review, but a lot better than nothing.

Considering the good, the bad, and the price, I think the Advanced Tactical Camera is a good bang for the buck. It won't pump out high end movie footage, but the fact that it is self contained with no wires and made to take a beating, will greatly appeal to tacticians. Here are some unedited demo clips, special thanks to my buddies at Viking Tactics.

Oregon Trail Defense - Nub Mod For ALS Holsters
Sunday, 13 September 2015
As you may know I'm a fan of the Safariland ALS series holsters and it can be hard to improve a great thing, but the Nub Mod is looking like a pretty... Read More...

Pistols
Sunday, 08 July 2007
This area will be for displaying short barrel firearms considered pistols. Examples would include M9 and 1911. USMC03 has kindly allowed some pics to... Read More...

ShotShow 2014
Monday, 17 March 2014
The usual delay, but better late than never. Got the vids on up at:http://www.youtube.com/milspecmonkey/Our Buddy Don joined us again for the ride,... Read More...

Tuff-Writer EDC Tactical Pen
Wednesday, 31 March 2010
Similar to the Frontline series, KnifeArt.com teamed up with Tuff-Writer to create this EDC variant. Looks like they may have taken some of my advice... Read More...

CAMELBAK Better Bottle
Saturday, 05 April 2008
My crew and I happily picked up some of these at shotshow 2008. The concept appears to be a clear response to Nalgene's monopoly on the durable /... Read More...