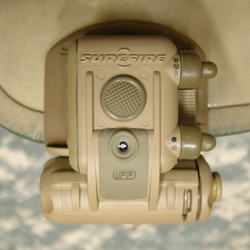 I saw this briefly at SHOT Show 2006 in Las Vegas but was overwhelmed by the thousands of other goodies through out the convention hall and the tent outside that I didn't take much time to check it out. But as fortune would have it, a good friend of mine gave me one shortly after the show. I would have preferred a pint of Guinness but I reluctantly settled for this instead. ;)

This compact helmet light is molded out of a sturdy, tan-colored polymer with the SureFire logo in raised lettering above the brightness adjustment button. The brightness adjustment button and toggle switches are covered with dark brown rubber. The IFF LED has a soft, khaki-colored cover with "IFF" recessed below the actual IFF LED. The battery compartment lies at the bottom of the helmet light assembly and has a battery cover complete with o-ring. There is a thick rubber lanyard attaching the battery cover to the helmet light.

The SureFire HL1-A-TN attaches to the helmet mount via a horseshoe-shaped bracket molded into the case. This slides into grooves on the helmet mount, fitting snuggly and with little wobble. Because of the horseshoe shape there is little chance of improperly reattaching the light to the helmet mount. This design is similar to the "hot shoe" found on some cameras which can use an external flash. SureFire has said that it will release a MOLLE compatible adapter to attach to your plate carrier/vest/chest rig/etc allowing this helmet light to double duty as a task light (ie: Quiqlite). To detach, simply press down on the checkered square paddle located between the two toggle switches and slide the entire helmet light assembly forward.

Selecting the different light modes is a simple task. Two toggle switches on the right and the brightness adjustment button in the center of the helmet light control all the functionality of this mini monster. The toggle switch on the top controls the white and blue LEDs. There are small, but readable, icons next to the toggle switches on the helmet light to indicate "white LEDs," "blue LEDs," "off," and IFF IR LED strobe "on" and "off." If you can understand these icons you don't need the user manual. But just in case... Up turns on the white LEDs, down turns on the blue LEDs and the neutral position is off. The bottom toggle switch is even simpler - up turns on the IR strobe and down turns it off. While this setup is very easy to use and conveniently placed, I have had instances where I have had a ND (negligent discharge) when attempting to switch light modes since they are close together, so watch your fingers.

The large, round button in the middle is what I've been referring to as the brightness adjustment button - because that's all it does. While either the blue or white LEDs are switched on, you can use this button to cycle through three pre-programmed brightness settings. The brightest being very useful for navigating in even the darkest spaces and the dimmest still providing enough light not to ruin your natural night vision (your eyes). Another nice feature of this helmet light is that it remembers the last brightness setting you selected and will start at that brightness setting the next time you use either the blue or white LEDs. Unfortunately this memory setting is shared by both the blue and white LEDs. But for something this small I didn't expect any memory setting.

When reading the following section keep in mind that this is only to give you an idea of the lighting capabilities of this helmet light. I am not an engineer, nor am I well-versed in the scientific testing methods so don't be surprised at the limited amount of "testing" shown here. This is simply my humble attempt at illustrating the key lighting features available on SureFire's HL1-A-TN helmet light. The results in the following photos may vary due to your monitor settings.

As the above images illustrate, this compact helmet light puts out a great deal of light on demand. Just look in the direction you need light and the SureFire HL1-A-TN will do the rest. Naturally you'll have to take some time to adjust and "zero" this light to meet your needs. Having completely ignored the instructions that came with this light I decided to position the helmet light so that it would be illuminating anything directly in front of me while I was at the low ready. Unfortunately this puts the beam high and to the left when I am standing or sitting making it almost useless for reading a book or rummaging through my ruck sack. That said, I don't have a need for a helmet-mounted light in either of those situations. Transitioning from the low ready to a standing, unsupported firing position brings the light a little to the right (FYI I'm right-handed) but with minimal practice it still illuminates everything in front of me. As I mentioned before, I chose this arrangement because it best suited my needs. You, on the other hand, just might like reading late at night while wearing the dome of obedience, so adjust it accordingly... wierdo.

Last but not least is the IFF (Identify Friend or Foe) strobe which uses one infrared LED to produce this incredible flash of light. Since the IFF strobe is mounted on the side of the SureFire HL1-A-TN helmet light directs a majority of the IR light to your left and being recessed slightly it produces a nice cone of light. Outdoors this miniature strobe would be just as effective as any other strobe out on the market and still takes up less space than even the littlest Firefly strobe. I've provided a little video to demonstrate the capabilities of this little strobe as well as a video comparing the ever popular MS2000 strobe to SureFire's HL1-A-TN. Right away you'll notice that the MS2000 has a sharp burst of IR light as well as a shorter interval between strobes compared to the HL1-A-TN helmet light. I think that this is a good improvement as it interferes with my night vision a lot less than the MS2000's abrupt strobe. Actual field performance? I don't know yet. Haven't had the opportunity to test this out. And to be honest, I'm not high speed enough to have ever needed a strobe in my military career so you probably won't be getting any AARs on this from me anytime soon.

The last thing I decided to do was a quick water resistance test. I didn't see any waterproof markings so I assumed that it was, at best, water resistant. But sprinkling water on it was just too boring so I decided to submerge the helmet light in about 4" of tap water. The helmet light was turned on and remained submerged for the remainder of my photo shoot - which was approximately 10 minutes. During this time I shook it around (under water) to remove the trapped air bubbles for better photos. And to my relief the helmet light kept going without experiencing a single malfunction. Afterwards I lightly toweled off the excess water and opened the battery compartment to check for leaks. While there was a little moisture present, not enough water had entered the battery compartment to cause any problems. Obviously that doesn't mean this light is waterproof so I don't go throwing this in the pool anytime soon. I will try to find a thicker, replacement o-ring at the local hardware store to see if it fixes this problem and post my results later.

This nifty little item is up for sale all over the internet with prices averaging around USD120. For that price I'd probably have bought one if I hadn't been given this one. Especially now that they're being offered in a variety of LED color combinations: White/Red/IR, White/IR/IR, Yellow-Green/IR/IR being the other options. Don't know if I'd use this in a field environment but for the urban setting it's proven to be an indispensable, hands-free, illumination tool. As far as durability is concerned, I've tossed this compact light around (yes, that means I've thrown it across the room and outside on concrete) and even dunked it in water but SureFire's rugged helmet light has proven to be just as reliable as my many other SureFire lights. Of course, I'm not surprised, it is a SureFire after all.

Rafter-L Gun Leather - Concealed carry kit
Wednesday, 17 February 2010
I had an opportunity to try something a little different here, some classic style leather for a modern day concealed carry setup. The man behind... Read More...
SHOTSHOW 2009
Saturday, 14 February 2009
I was able to get the crew back together and make it to Shot all the way down in Orlando. People actually friggn' scheduled this time to we were some... Read More...

Lone Star Medics - Medicine X
Friday, 15 October 2010
I've taken a grab bag of Tac classes and pretty much all of them were primarily about putting holes in bad guys, so I got to thinking diversifying a... Read More...

COUNTY COMM 1x4 Technician's Pocket Screw Driver
Sunday, 23 September 2007
So I didn't actually need this lil guy, but the price was right. Rather than having 4 hard to store separate screwdrivers, I have them all self... Read More...