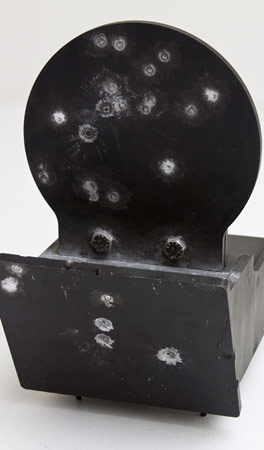 I had a chance to beat up on the Strikemark SM-1 not long and wanted to spread the good word. There are plenty of hard steel targets out on the market, but not many that reset in a speedy and reliable fashion. Utilizing 3/8" thick AR500 steel the SM-1 will take what the vast majority of shooters dish out, all with way up to 7.62 NATO. I found that even green-tip 5.56 wasn't a problem just leaving small indents while traditional ammo flattened out quite nicely. Functionality is great using a battery / electric motor system. Reset time is a speedy and consistent 1.5 seconds and one battery charge can rock out 1500 resets or more depending on temperature and other factors that effect batteries.

To recharge there is a simple plug port in the back, along with a power switch so no usage complication drama there. The only functionality concern I came across was that it is not good for the motor to shoot the target while still raising. Not a big deal, just forgetting this detail will eventually bust the unit. Worth noting is the charger is not included which is sold for $50. I inquired what was the deal with that as it seemed somewhat steep, but Strikemark  has a fair reason that when people buy more than one target they don't need a charger for each one and thus if included, the SM-1 price would just raise accordingly.

The construction is heavy duty as expected since it gets shot at all day long. Weighing in at 50 pounds and with fairly pointy feet, I had no movement issues due to bullet impacts. Target impact functionality was great on both pistol and rifle calibers. It didn't seem to matter where the impact was as long as the target plate was hit, it would fall as expected. I didn't get to try it, but my guess is .22 likely doesn't have enough juice to knock the target down consistently. Placement of the SM-1 can be a little tricky depending on the range so a stand accessory is available for those who don't want to shoot too close to the ground.

For maintenance and long term use notes, the main target is removable with bolts, which are shielded by the front plate. Once the target gets good and assed up, one can flip it over to get additional life out of it. Additional cool guy target shapes are even available such as the half circle to makes things a little more difficult. The unit is weather resistant, but not weather proof. So a drizzle is no big deal, but a downpoor is no good. Generally it is not a good idea to keep the SM-1 outside 24/7. Battery life is estimated around 2-3 years before it goes wimpy and access is available through the top lid by removing 2 hex bolts in the rear.

Since it worked just as advertised I'm quite the fan. Very easy to use and reliable. Perhaps pricey compared to non moving metal, however a delight to use. Metal targets are a great way to determine hits without having to waste time walking back and forth down range; However at longer ranges or with multiple shooters on a line things can get confusing, so having a target that falls and resets keeps both solid confirmation and training speed.
http://strikemark.com

Deep Conceal Ultra Holster
Tuesday, 18 September 2012
Deep Conceal sent me one of their bread and butter holster rigs to check out so I've been giving it a good look-see. Offhand I have the ULTRA model... Read More...

MTEK Weapon Systems G3A + G3C
Sunday, 28 February 2010
http://www.mtekweaponsystems.com I had the pleasure to connect with MTEK semi recently and appreciate seeing their spirit as a new company. Their... Read More...

Hazard4 Plan-B modular sling pack
Tuesday, 28 September 2010
Originally seeing this bag back at shotshow, I finally got around to getting one for myself to beat up on. The general shape certainly brings... Read More...