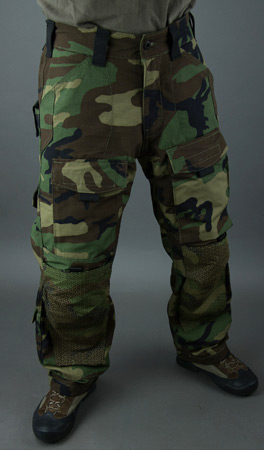 If looking for a feature rich design, the Raider Pants continue the fun the All Seasons Pants started.

Since the Raider Pants are an evolution of the All Seasons Pants, I think worth noting just how well my ASP pants have held up. Despite being my go-to pant for cooler seasons since 2014, there is barely any wear on them while I have had other pant designs get holes or damage after much less. Thus one could say I didn't necessarily "need" the Raider Pants, but it was an opportunity to check out the design changes and get a different color scheme.

I went with camo green on the ASP pair with the intent to tone down the look compared to a camo, but when woodland camo was offered for the Raider Pants, I thought it was a great opportunity to mix things up. With woodland making a popularity comeback in the tactical scene, it also has been around so long that the civilian side can view it as fashionable these days as well.

The most obvious design change on the Raider Pants is the addition of knee pad zones which is a welcomed bonus when wanting to use these pants as full on range pants. This does push the design to visually be more of a hi-viz / tactical look, but it never was low-key so makes sense. A fancy fabric literally called Super Fabric is used to reinforce the knee zones which besides being quite durable also has an interesting technical look. External pad access is available with a simple hook and loop pocket opening and a generous strip of loop is in the interior with intent to be used with Kitanica pads. Attaching with hook to the loop, one can dial in if they want the pad to be more of a shin or knee pad with placement. The pads themselves are interesting where the many divisions offer a lot of flexibility and overall lightweight. Using another fancy material, G-Form RPT Reactive Protection Technology, the concept is that with normal use they are generally squishy, yet reactively harden up when force is applied to offer protection.

For small concerns the pads have the hook attached by glue so I found myself having to be more careful when removing the pads and although the pads overall work and lay where I want them to, it would be nice to have some sort of knee cinch strap to bring the pads closer to the leg when enhanced coverage is needed. That considered, most of the time users will want to let them hang naturally to get airflow and less friction.

Not getting too carried away, let's jump to the core pant features. The belt loops are spaced reasonably and made of webbing so won't have to worry much about durability. A couple in the back sport extra loops providing bonus lashing options. The main fly opening uses a sturdy metal button and YKK metal zipper. I'll take that as a design choice to have the convenience of a zipper, but metal to try and keep as much durability as possible. A waist adjustment system is built in using simple hook and loop which is a great way to tweak the starting fit before even putting a belt on. Additionally they are low profile enough that don't cause issues when wearing a belt.

The hand pockets are spacious, capable of carrying a 30 round rifle mag with ease and have reinforcement clip zones to enhance common wear areas. Mixing up the symmetry there is a multipurpose pocket on the right, using a webbing hook and loop flap. The flap itself can have some adjustment to accommodate longer items, but as is it can easily hold items like multitools, folding knives, and medium sized flashlights. Things then get interesting on the left side where instead of a pocket there is PALS webbing so one can mount a pouch of choice. Now some people are rightfully concerned where you can only get so much durability sewing PALS to ripstop; as long as within weight reason, the modularity actually is pretty cool. Something simple like a shears or a tourniquet pouch is quite reasonable, but there are enough channels where easily could mount a mag or dump type pouch. Even with no additions, the PALS can be handy for lashing to or pen-like item stash points.

Moving down a little are the frontal thigh pockets which are some of the biggest I've seen on a pair of pants, when lucky enough to have them on pants at all. Using hook and loop closure I usually add a little canceler to assist in one-handed operation, however the amount provided will let users dial in their security vs ease preference. The pocket placement is great since able to access while sitting and I think generally easier to run with items in that location as opposed to sides. These pockets are slightly billowed and can totally hold a full sized smart phone. The left one has a bonus internal sleeve which is welcomed when wanting to keep items closer to one's body to minimize an item bouncing around in the pocket. Mixing up symmetry again, touching the frontal thigh pocket on the right side is a pocket sized about right for a medium flash light or folding knife while on the left side are 2 pen slots; sized about right to hold a sharpie or a chemlight.

As one might expect the back pockets are generous, being able to easily hold 30 round mags as well. As a unique and cool feature though, a billow is released with a snap which allows even more storage for an item like a Nalgene 32oz bottle. This comes in quite handy when wanting to use the back pockets like a quickie dump pouch. Since this is usually how I use back pockets, I also appreciate there is no closure flap to have to manage.

To work around the existing pocket party, the main cargo pockets end up with more of a diagonal back placement than typically seen just on the sides. Hook and loop flaps are used again and include a grip pocket zone in the flap itself to add more opening options. The cargo pocket is of good size with billowing on the front and back side, but when that doesn't cut it, a snap releases even more holding capability in a similar setup to the back pockets. The holding capacity certainly is nice, but items do want to shift around to around where the knee bends can be a bit of a hassle so I usually end up stashing soft items like gloves here.

Although already talked about the knee pads zone it is worth mentioning the knee zone has articulation sew points. This makes the pant flow to the leg better however also kind of makes for some weird folds visually. That issue doesn't seem to change if knee pads are installed or not, but overall not a big deal in my book if prioritizing functionality.

Completing the pocket party are lower pant leg pockets on the sides. Using hook and loop closure they are a good size for smaller items like a bandage or slim gloves. They have billowed sides if want to get wild, but usually one wants to keep these zones light weight, otherwise they will be quite noticeable with most movement.

For a new addition the leg openings have a simple draw string system. A small change, but handy when wanting to keep out bugs and debris. If don't like the supplied binding tape pull, one can always use their own preferred type.

As a result of all the layers of pockets and durable materials the Raider pants do give a "heavy" feel and probably not a first choice for hot weather specific environments. That said, for my needs I've been a fan of these pants for all kinds of uses from daily use to training on the range. Some of the features can seem a bit overkill and just fluff, but I've appreciated them all at least once. Looking back at my old All Seasons review it appears no knee pad reinforcement was one of my only gripes so looks like I wasn't the only one who felt that way when full embracing the spirit of the pant design into the new Raider variant. The Raider pants also come in more color options to give users even more of a feeling of uniqueness.

Still made in the USA with high Kitanica standards, the Raider Pants aren't cheap, but they can make for a solid investment for one who wants some high adventure / high functionality pants.

COUNTY COMM Super Spork (Made by: Light my Fire)
Saturday, 11 August 2007
DIM: 6.5" Long , Approx 6 grams in weight. Got a couple of these for amusement around the house and on the move eating. One side is all spoon,... Read More...

MULTI-CAMO - MULTICAM : Quick comparision
Tuesday, 08 August 2006
-While here I bet you are wondering what the difference of this so called multicamo is from multicam. I don't have a huge swatch, but I did see key... Read More...

SWAT Basic Class 410
Saturday, 22 May 2010
Recently I had the chance of a lifetime to attend a 7 day basic SWAT class thanks to the good word from a tactical buddy of the DC area. Of course he... Read More...