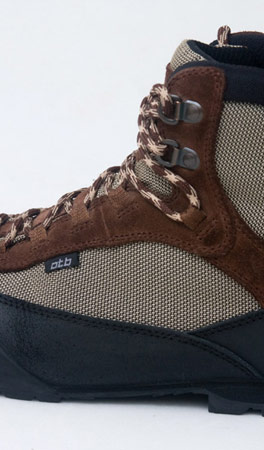 Mister Thor Boot here has an interesting design intent which was made specifically with Special Forces in mind. The idea is to have a boot where operators can insert into the area of operations and be covert capable in which the boots appear civilian in nature. The attention to details and heavy duty materials used separate the Thor from typical hiking boots to make them tactical ready.

Like other OTB designs, the boot core is a high traction non-squeak Vibram outsole and midsole unit. This provides a solid combination of traction and cushioning. The toe area is given a generous sized bumper to aid climbing. Sometimes it is described by OTB as "sticky", but as you can guess that just means it has a good grip and doesn't collect filth. Inside is a composite shank for support then a dual density Ortholite cushioned footbed with Drill-lex looped wool lining for increased wicking and foot comfort. Moving up on the boot, the main material used is two tone Cordura quarter panels for increased abrasion resistance. Leather is then used for accents and the lace platform. For added durability the toe and heel areas are made of special compressed suede Roc-Tuff. This stuff is very tough and even highly scuff resistant.

With Spec-Ops in mind, the top lace loops are rounded metal D-rings rather than other metal hardware so they will not snag. Thus making the Thors jump-capable. The laces themselves have a "sausage" shape design which makes them much less likely to untie on their own. To enhance the civilian look the laces are a brown and tan blend which give off a typical hiking boot vibe. The D-ring and sausage lace combo causes a lot of friction so to tighten I find myself having to pull away from the sides of the boot rather than other angles. For a nice detail, a lace loop offset is in the notch where leg meets foot, to prevent circulation issues on long hauls. As seen on most OTB designs, a large sized heel pull loop is on the back to make taking the boots on and off easy.

The height of the boot is considered mid-size which is a good balance of flexibility and support. The construction used is on the stiffer side in comparison to say the super flexible Bushmaster. As a result the Thors will offer more support for doing those hard ankle hitting tasks. The amount of padding used will also offer protection, but gives the boot a slight bulky feel. This also gives the Thor a moderate temperature rating in my book as they will be a bit hot in a blazing desert, but offer more warmth when it gets cold at night.

So you might be an operator and asking...why don't I just get a random civilian hiking boot instead? I would say the main reason is the Thor TC goes out of it's way to use the most durable materials and construction. To seal the deal, the Thor is also very anti-snag aware while some hiking boots can get a bit dangerous with cosmetic touches. Although I haven't been jumping behind enemy lines or anything, I've been enjoying my Thors as a solid cushioned, yet supported ride. Despite pounding on them for a while, they still look near-new.

SHOTSHOW 2009
Saturday, 14 February 2009
I was able to get the crew back together and make it to Shot all the way down in Orlando. People actually friggn' scheduled this time to we were some... Read More...
Viking Tactics Pistol 1.5 Class
Tuesday, 30 September 2008
Viking Tactics Pistol 1.5 Class Back at shotshow 2008 I was fortunate enough to meet up with Kyle Lamb and was quickly able to determine he was a... Read More...

TacArm ACU Ballistic Knee Pad Insert
Sunday, 01 July 2007
TacArm is a small company that is lesser known, but has some great ideas. They noticed the problem that the issued vests were generally doing the... Read More...

First Tactical Modular Pouches Part 1
Wednesday, 27 July 2016
With First Tactical already offering several bag and pack options it is natural they also have some nice pouches to go with them and great to see... Read More...

HELMET CAMERA XTREME PLUS KIT: 560 resolution version
Saturday, 01 July 2006
For my work I did a hunt for some helmet cams and had this one recommended to me by a SF acquaintance. After some research it was clear this kit... Read More...

ITS Tactical ETA Trauma Kit Pouch Fatboy
Thursday, 29 May 2014
There are a lot of medical pouches out there these days so always good to see some unique designs like this one. ITS Tactical has been around as a... Read More...