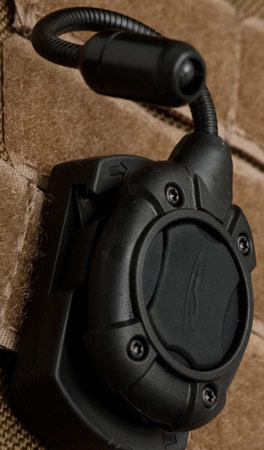 Princeton Tec brings an interesting short distance illumination package with the fairly new MPLS (MODULAR PERSONAL LIGHTING SYSTEM). As the name hints, it is more modular than most lights and as a definite bonus is generally low profile and light weight. Rather than having some fancy rotation system on the mount, someone over there was smart enough to just slap an LED on a gooseneck. This lets the operator easily change the pointed direction freely where many helmet lights are stuck in one position or limited to one axis of rotation. A slight down side to the gooseneck is that the pointed direction can be knocked out of place by slings or bumping into one's environment. Fortunately the light won't be knocked off the mount and it is easy to fix the direction right back in place.

They don't call it a system for no reason as all the cool guy mounts come with each MPLS. This includes mounts for: helmet, PALS (with sticky magnet), Picatinny, and OPS-CORE (reversed Picatinny). The helmet mount is made to go on the lower side of most ballistic tac helmets and uses a simple screw to lock in place. The PALS version utilizes a metal clip to allow a solid connection on 1" webbing and as a bonus, a magnet with sticky back is included. I wouldn't say the magnet is super powerful, but makes for a quick way to attach to a place like a vehicle dashboard. As you may have guessed the main intent of this mount is that it works well to attach to one's tac vest. The Picatinny mount allows for mounting to anything with 1913 rails which includes many weapon systems these days. Most people probably won't know what to do with the reversed Picatinny, but if you have the OPS-CORE ARC helmet rails they are a welcomed addition as they allow low profile mounting.

The main body portion uses 2 points to rotate lock into any of the mounts. Most of the pieces are plastic based, however the inner mount "bumps" appear to be a metal piece which is a nice plus to durability. This rotation motion makes the body quite easy to take on and off. If hit just the right way the body could be knocked off mount, but the risk is minimal when it comes to the game of balance of security vs ease. I will have to say that on my batch the rotation tension varied a bit on each mount where for example the PALS mount was a little loose and the OPS-CORE mount was a little tighter.  Personally I would rather they all be on the tight side for a little better security as I don't mind having to man up to rotate it on or off. If your mounts are already attached it is pretty sweet how quickly you can move the light between any of them, from weapon to vest for example.

Functionality wise things are nice and easy with one big button. The size is good, it is slightly recessed, and button even clicks for confirmation of a good press. Starting in off, one quick click will turn it on in low mode. A click soon after will turn it in high mode. A later click in either mode will turn it off. A press and hold will give momentary light in which it will turn off once released. Starting from off, a hold will give momentary low power and starting from low power a hold will give momentary high power. They claim you can milk the MPLS for a good 36 hours of light with fresh batteries. The unit isn't waterproof, but is resistant so can hold up to any rain or brief dunkings. The battery cover is pretty easy to take off, as a future improvement adding some rubber or some form of o-ring would raise the water resistance. I wouldn't say the lithium coin style batteries are very common when it comes to replacing acquisition ease, but they make sense design wise to keep the unit small. Batteries are included with each unit so you are ready to go.

As a recap on what I mean by short distance illumination is that this is by no means a tactical patrol light. I believe the high setting is somewhere around 10 lumens where most tactical patrol lights have at least 60 lumens. It is however great for "personal" light such as for reading, gear check, ID, or viewing environmental details. Thus in these cases the low lumens let you see what you need to without attracting the attention of discharging a bright light. Since there is only one actual light bulb on the unit, they make many different variants. They currently offer LEDs in Blue, Red, Green, White and IR incorporated in Black, OD, or Sand colored units. The gooseneck is still black on all of them, but only stands out on the Sand unit.

It doesn't do everything, but for those who don't need all the features of larger helmet lights, the MPLS is a lot more flexible as a whole system with less bulk. Some of the larger systems require you to buy mounts if you want to attach it to anything besides a helmet that cost near as much the whole MPLS kit. (Yes I'm talking to you mister Surefire HL1-A Molle Adapter) As further comparison, something like a Photon Freedom Micro will be a little smaller and less expensive, yet is not as rugged, harder to use, and has less mounting options than the MPLS. Obviously based on the mounts a tactical person will get the most bang for buck out of the kit, however I can see where civilians would dig it as well if inspired to mod some of the mounts to their needs. Overall I'm digging the MPLS so far, I may just add some glue to the mount knubs on the body to raise the rotational force required to unmount.

Deep Conceal Ultra Holster
Tuesday, 18 September 2012
Deep Conceal sent me one of their bread and butter holster rigs to check out so I've been giving it a good look-see. Offhand I have the ULTRA model... Read More...

Accurate Armory TI-7 Tactical Buttstock
Tuesday, 14 February 2012
When back in my hometown for the holidays I found about a small company, Accurate Armory that has actually been around for a bit doing cool things.... Read More...