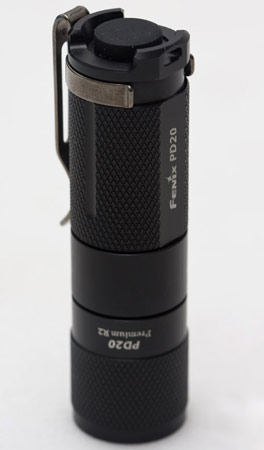 Maxpedition offered this set for me to check out and although a little skeptical at first, I thought I'd give them a try to see what else is out there besides Surefire. So far I've been pleasantly surprised as they have held up and functioned quite well. Common Fenix light build features include: Aircraft grade aluminum, Type III hard-anodized finish, Waterproof to IPX-8 standard, and Digitally regulated output.

Starting with the PD series, these are sized to be compact and fit easily in pockets. From what I can tell on the Fenix site, both the PD20 and PD30 are available in variants with and without belt clips. Personally I'm a fan of the ones with clips, however the body design on the clip-less variants are optimized for anti-roll for those who are looking for a more smooth exterior light. The PDs have similar bezel tips which are fairly low key, but better than being full flat for contact hits. The main business button is on the back and for the most part flush with the back extrusions which allow lanyard mounting and to stand the lights upright in a "candle" like fashion. Since relying on just these 2 points to stand on, a fairly flat surface will be required. These extrusions also make the button slightly harder to press, but is a good balance of usability and prevention of accidental discharge. Most Fenix lights have bonus heavy duty trapezoid threading, however the PD20 appears to have normal style threading, I'll guess due to its small size. The core difference between PD20 and PD30 is that the PD20 uses 1, CR123 battery while the PD30 uses 2. The extra battery gives the PD30 more lumen power on the high end and a little bit more performance time. To accept 2 batteries the PD30 size is thus longer keeping it slim, but not as super compact as the PD20. The PD20 seems to have a generally smooth reflector and as an interesting note the manual suggests only using the full blast turbo mode for 10 minutes or less at a time due to heating concerns. The other lights have more of a ripple "orange peel" style reflector and do not have time usage restrictions listed in the manuals.

To manipulate the functions on the light the user toggles bezel rotation and then button presses to get the mode they desire. Turning on requires the button to be pressed to a full click and then let go. During this action, no light will be produced until the button is released. When the bezel is on, but not rotated fully to lock, it is considered general mode and when full tightened it is in turbo mode. When in turbo mode, a soft (non-click) button press will toggle between full power mode and strobe. General mode offers 4 lower power modes and even an SOS signal setup, again the soft click is used to toggle between these. The force required difference between full and soft clicks are not vast so can take some getting used to. I have concerns in getting to strobe in a high stress situation, but do appreciate such a feature is on the light at all. Due to these characteristics I'd say the PD series was designed more for civilian outdoor adventure types. For some extra functionality notes, I am able to full-click rapidly multiple times in a row to get into modes that normally require soft presses.

The TK12 is quite the different beast and appears to be optimized for tactical preferences. The belt clip is standard and like on the PD30 variant, it can be removed. The design is based on using 2 CR123 batteries, however 18650 rechargeable batteries can be used by getting an affordable battery tube accessory or buying the TK12EX package. The bezel has much more aggressive extrusions and although not especially sharp, they are plenty enough to settle a man down with a wack on the head. An anti-roll ring is included which double functions allowing a cigar style grip. For those who find this piece to just be in their way, it is removable. A bonus hole is in this ring for a secondary lanyard attachment point. The button area has extrusions that are notched and come just under the button. This allows for a easy button press while still having some accidental discharge protection. Since the button extrudes out a little, the TK12 cannot stand on its tailcap without external support. Due to this button setup the light can be difficult to engage in the cigar style grip as the button doesn't stick out openly like on Surefire lights.

On the TK12, a soft press functions as a momentary on while a click-press will toggle the light completely on or off. The TK12 also has general and turbo settings controlled by bezel rotaion, but changes modes using bezel rotation repetition rather than soft presses. 3 modes are available including: Outdoor Mode, Camping Mode, and Hunting mode which are toggled by quickly rotating between turbo and general mode twice. I find it humorous Hunting mode includes a strobe so I think tactical is a more appropriate title. Although this toggle action requires a second hand to be done quickly, the method is fairly user friendly after a mere 5 minutes. An important aspect is this setup also allows the light to be stored in the exact mode desired so one can go from off to on without any extra adjustments. As a further bonus I was able to completely remove the batteries and the last set mode is kept in memory of the light. This small detail is particularly useful in a tactical low light setting when an accidental discharge of high power light may mean death.

All these Fenix lights come with some nice extras in their packaging. I'd say the only thing sadly missed is that no batteries are included. Paper work wise; instructions, a warranty card, and other product info is inside. Light specific pouches are included which are no-thrills but functional. They fit the lights well and have velcro for the main flap closure, a velcro flap on the back for mounting with an additional belt loop, and even a D-ring up top for further options. A lanyard, 2 replacement O-rings, and an additional button cover are also supplied. For some reason the TK12 comes with an orange hi-viz replacement cap rather than black, I guess someone out there asked for it although I personally don't ever look at the button when using flashlights.

Overall these Fenix lights offer excellent bang for the buck. They can get up to some impressive max lumen outputs while capable of being toggled to lower settings for longer use. Some people may not dig all the bezel rotation for mode toggling, but I find it to be a good balance of ease / speed / and function control. The PD series is more than enough for civilian use which can even serve as tactical backups while the TK12 is an impressive full tactical setup offering more modes than most in it's size/market class. Be sure and check out my video for further clarity!:

ESSTAC Medrat MC:
Friday, 18 May 2007
This pouch is the result of Esstac's take on a breakout med pouch. Based on a GP shape, the pouch unzips clamshell style. The front has PALS, loop... Read More...

Vertx Phantom LT and OPS Pants
Monday, 17 March 2014
Vertx has been doing well with their original tactical pant design so it makes sense to see them expand upon the concept with their new Phantom line.... Read More...