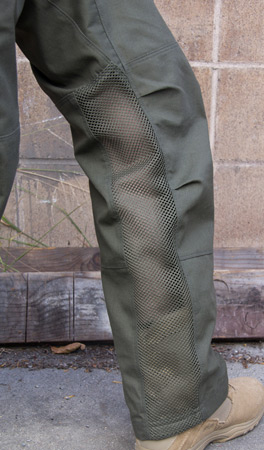 As you may have seen in my earlier review on the Phantom OPS pants, they are highly based on the original popular Vertx tactical pant design, but use 6.5oz 65% Polyester/35% Cotton mini Rip-Stop fabric with an IntelliDRY treatment. Now with this "Powered By Airflow" variant they combine the mesh system as originally seen on the Fighter Design Airflow Pants to make a very interesting blend of a not too visually flashy tactical pant while offering a noticeable difference in hot weather situations; heh also appears to be the longest name I have ever seen for a pair of pants.

For those new to Vertx pants in general, they offer a nice fit with the durability expected in a tactical pant and make a nice balance of having cargo pockets yet they are visually easy to overlook when no items are stuffed inside. An overall design goal to not scream tactical man in appearance while the pants still offer the tactical functionality essentials. They have nice main side pocket openings, integrated secret zipper stash pockets, and bonus dividers in the cargo pockets. Retention flaps are used instead of any velcro for nice long term durability and no noise operation. Now it would be fair to say adding a bunch of mesh to the design doesn't quite ride well with the low key appearance concept, but I think the mesh is pretty easy to overlook and most folks seem to not even notice unless I point it out. Since the mesh is mostly on the interior legs it takes a fairly exaggerated leg pose to really show it off. On the first batch of these pants the mesh was multicam no mater what the pant color was, which I thought was pretty ridiculous looks wise so thus this is why I waited out for color matched mesh. To clarify that was just a first run color issue and multicam mesh versions are no longer being made.

Some I'm sure are skeptical about the airflow system, typical when it comes to anything new, but just like on the original Fighter Design Airflow Pants, it works. The system noticeably lets air flow to the legs during movement or any sort of breeze. This works great during running or getting physical in general, which just so happens to be when cooling is typically desired. Not limited to just the inseam area, there is also mesh on the sides of the cargo pockets to offer an outflow port. When scoring a breeze from the back these mesh pocket zones work great for inflow ports as well. I will say however the mesh doesn't go up as high on the inseam as the Fighter Design pants so there isn't as much crotch zone flow and note this in hopes Vertx may consider raising the leg mesh zones.

Although the mesh certainly brings the pro of airflow, it does bring some possible con considerations as well. If looking for a full seal to keep out bugs, only the bigger ones will be kept out and if in a very dusty environment one can end up a bit dirty on the inside. Any sort of angry vegetation such as thorns will be more snag happy on the mesh too, yet you'll likely only encounter this issue rocking some full on low crawling. That said, when it comes to beating the heat, airflow pants are about as close to the feel of wearing shorts while actually still wearing pants as one can get. The balance of main fabric coverage offering elements protection vs mesh zones is very reasonable.

The Vertx / Fighter Design collaboration looks like a great idea so far where those who thought the original Fighter Design pants cost too much now have an option to try out the technology. They still aren't by any means cheap, but the mass production with Vertx has certainly made them more affordable. Overall the Vertx Phantom OPS Airflow pants really offer a unique end result I think is especially worth checking out for hot weather wear.

Recommended place of purchase: and Bonus 10% savings on anything at PredatorBDU.com!
Code: MONKEYSAVINGS

Wilcox L4 G24 NVG-Mount
Friday, 18 December 2015
When getting into Night Vision gear you quickly learn the accessories also are very important and having a solid mount is a good example of this.... Read More...
UCP SUCKS (Universal Camo Pattern) RANT
Sunday, 25 February 2007
UCP SUCKS (Universal Camo Pattern) RANT: - For starters I have to breakdown all the acronyms just to make sure you know what the hell I'm talking... Read More...
Tactical Response - THE FIGHT - Force on Force Scenarios
Sunday, 09 August 2009
Back in February the Tactical Response wagon came nearby my neck of the woods and with a little help from Original Special Operations Equipment owner... Read More...

Insight Technology: Super small thermal sights
Thursday, 08 March 2007
Got to look through some of these and was super impressed in their handsized thermal sight. They also had a dot sight with auto aligned visible... Read More...

MAXPEDITION - Modular Inserts
Sunday, 25 October 2009
Maxpedition and other tactical gear makers have been making bags with loop velcro panels for a while so finally we have some more options on how to... Read More...