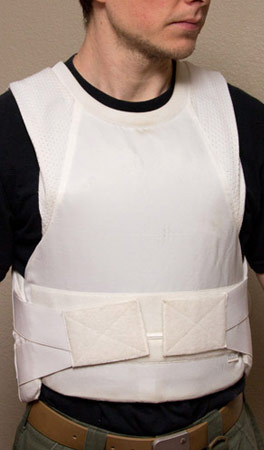 Kevlar based soft-armor has been around for a while now so when it comes to deciding which one to get these days it comes down mostly to the small details in the carrier and of course price. My neighborhood isn't the greatest so I was happy to acquire SafeGuard Armor's Stealth package. Hence the name the Stealth design is meant to be a low profile/low viz carrier. Mine is level II rated so will be the lightest and most flexible they offer, however armor inserts are available up to IIIA rated with Stab and Spike level 2. Level II raw should be fine for my intended use as street thugs don't tend to roll with .44 mag or similar larger powered pistols and I'm not sticking around for a knife fight.

If money wasn't a factor I'd say go ahead and go IIIA, but the price difference is enough to make it something most will need to consider. Be sure and check out the link at the bottom of the article to see the ballistics chart.

Back to specifically the carrier, offhand they offer white and black that should fit most folks needs. I think a grey in the future might be a good middle ground of concealability blending in with varied clothing types. When it comes to pretty much all white clothing, it is hard to keep it from not looking dirty with normal use. Fortunately the armor package can be removed from the carrier to allow washing of the carrier. The armor package has all these care warnings that make you worried to even look at it, but the general idea is don't machine wash it or keep out in a dumb place like on the dash of your vehicle. CoolMAX is used for the majority of the carrier which helps a bit with breathability. Air just isn't going to get through the armor, but the carrier material does give some stand off to let air sneak in to minimize sweating and help evaporate any existing sweat.

Functionality wise the vest uses a cummerbund like closure setup with velcro connection and double wide elastic. The result is low profile with no hardware and loop velcro is even on the exterior of the connection flaps if one needed to tighten to the point of an overlap. Certainly a valuable functionality option, yet overlapping would be slightly more bulky. My unit was size small, with a 34" chest on on the low end of their size scale, but overall the fit was acceptable. At first I wanted to tighten things up like I do my plate carrier, which would require some flap overalap, but then after wearing all day long a couple times I ended up with a more loose tightness anyway for long term comfort. This brings up the note the shoulder areas are not adjustable which have their own pluses and minuses. Being non adjustable makes the shoulder areas one of the thinnest zones, so very low profile, however I would like the vest to ride slightly higher as a user preference. For most people the fit will work as it can be hidden by an undershirt while the armor isn't so long to make bending over a disaster. In retrospect a size XS likely would fit me a smidge better for the higher ride and more strap tightening area without having to overlap.

Noting smaller details, the zippers used to access the front and back armor insert zones are done in "invisible" zipper style, as one would see on many lady skirts. This way they generally are recessed so the slider hardware does not print(show through clothing). The rear even has an added elastic piece to cover the slider when in storage to assist in coverage / comfort while sitting down. On the front it isn't there since not really needed contact pressure wise and would get in the way of loop velcro connection points.

When it comes to trying to wear the Stealth carrier concealed I found on my experience it comes down a lot to body position and covering clothing types. Sitting is always tricky as it will want to push the armor up some, either the front or the back depending on how hunched over the wearer is. This is particularly a problem with non-hardware shirts, but minimized much more by any shirts with buttons or snaps. As one would guess, a baggy jacket can cover about anything, while bending over with a more fitted jacket can cause some printing. In theory a higher ride would minimize the sitting exposure issues some and how tight the waist straps are can be a factor.

Overall I think the Stealth carrier is a simple and effective setup, since I plan to keep using it I didn't take it out put rounds through it so we'll just have to take their word on SafeGuard's NIJ ratings, but them being made in the USA by a company that has been around for a bit, I'm not worried at all there.
http://www.safeguardarmor.com/stealth/

COUNTY COMM Compact Battery Holders
Sunday, 23 September 2007
Got some of these recently and although simple, I find them pretty handy and well designed. At first I blew off the thought of battery holders for a... Read More...

MMC: Adjustable combat pistol sights for Sig P226
Sunday, 06 May 2007
Ok so this isn't exactly an optic, but thought this would be the best place for it. I wanted some nice adjustable sights for my P226 and after a... Read More...

Maxpedition Aftermath Compact Toiletries Bag
Thursday, 12 December 2013
Commonly toiletry bags are budget style made so it is nice to see this heavy duty one from Maxpedition. Now I'll admit the name is somewhat amusing... Read More...