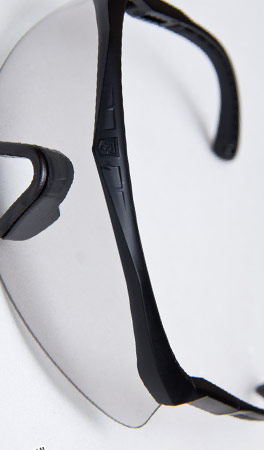 Revision Sawflys have been around for a while, but semi recently Photochromic lenses are now available to offer some more options. By default I'm still a fan of the Sawfly glasses in general as they offer great coverage in a nice lightweight, flexible package. I was even able to get this sample in a small frame size where regular size fit my head pretty good, but the small frame is just that smidgen better. None the less I'll mostly be blabbing on about the new lens. The general concept of Photochromic is that when hit by UV light the lens darkens, which in of itself is pretty darn cool. Thus the idea is to have clear lenses in the dark and dark lenses in bright light outside that is seemingly magically adjusted on the fly without having to change lenses.

There are some complications though as the UV light has to be direct rather than bounced to get good darkening results. Due to this, even wearing a common baseball cap will shade the glasses enough to prevent them getting as dark as most would prefer outside. This applies even more so to a vehicle situation. Even when fully blasted with UVs from direct sunlight, the Photochromic lenses don't get quite as dark as the classic dark lenses. This isn't necessarily a bad thing as usually I don't find the need for full dark unless in super bright reflective situations. On the other end of the spectrum, with no UV light the lenses get pretty darn close to clear. On a night op however, this super slight difference may be noticeable.

With those complications noted, they still really shine in say a CQB environment where one is more likely to wear a helmet than a cap with the light conditions constantly changing going back and forth from outdoors to indoors. While the lenses take about 1 minute to fully go from one light situation to the other, this is much more convenient than having to bust some sort of tactical time out to change lenses or fight through with decreased vision by having the wrong lens for the situation. In my experience the Photochromic lenses are just dark enough to take the edge off a sunny day, while being tame and adaptive enough to see clearly when quickly transitioning to an indoor environment. In contrast a not so good situation is say a long drive on a traffic heavy bright day where everything is reflecting intense sun into your vision, yet sadly it is not direct UV so the Photochromic lenses will stay fairly clear.

Revision provided some extra intel for those more interested in the Photochromic technology:

Although my white ass usually wears a hat outside I look forward to trying out the Photochromic Kit to be my go to tactical lens setup and will hang on to the classic darks for the really bright situations and driving specs.
http://www.revisionmilitary.com/store/sawfly/sawfly-photochromic.html

Blauer Clash LT 8" Boot
Sunday, 27 July 2014
Footwear typically doesn't change too much these days so it was a treat to checkout something truly different with the Blauer Clash series. The main... Read More...

MTEK Weapon Systems G3A + G3C
Sunday, 28 February 2010
http://www.mtekweaponsystems.com I had the pleasure to connect with MTEK semi recently and appreciate seeing their spirit as a new company. Their... Read More...

Safariland ALS holsters
Tuesday, 15 July 2014
This is a review I should have done a while ago as I've been using ALS (Automatic Locking System) holsters for a while now. Safariland didn't... Read More...

OSOE: Binocular / Camera Strap
Sunday, 26 April 2009
This is a simple and effective strap for your fancy camera or pair of biznocs. I'm a camera totn' dude, I mostly use it for that. To mount, the strap... Read More...